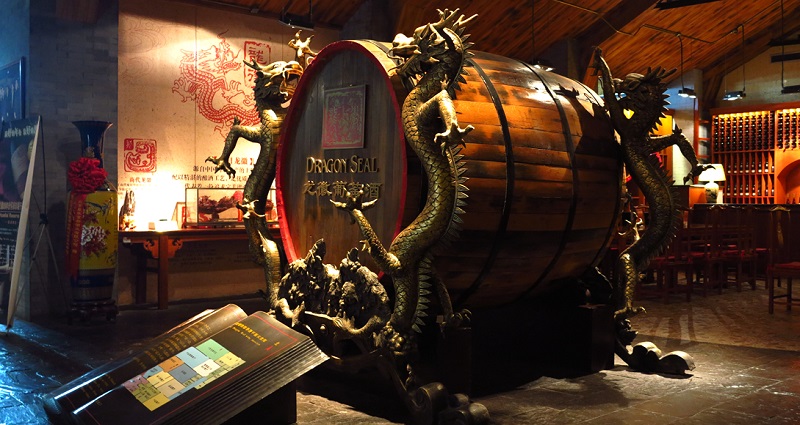 A museum with architectures of late Qing dynasty, it shows tourists the historical development of Beijing wine industry. It also provides customized wine service by posting your memorable picture onto wine label under the guidance of a professional designer.

In 1910, a French clergyman converted the Heishanhu Church's graveyard into a wine cave at Fuwai of Beijing. He hired a French oenologist to produce both red and white wines for the mass and daily drinking. In 1946, the Church officially registered the winery, named it "La Shangyi Cave de Pékin (Shangyi Winery of Beijing)" and began to sell its products in the domestic market. This winery had a total staff with 13 employees in 1949 and annual capacity less than 100 hectoliters. In February 1959, the Beijing Government changed its name into "Beijing Winery" and moved it to the existing location at No.2 Yuquan Road. At the same time, Beijing Winery launched the "Zhonghua " brand and began to produce quality wine and spirits such as "Kuei Hua Chen Chiew ", "Lien Hua Pai Chiew " and "Chinese Sweet Red Wine". Beijing Winery soon became a renowned producer and the market leader.

On March 17th of 1987, Beijing Dragon Seal Winery was established as a subsidiary of Beijing Winery in order to introduce French oenology into its products. The first bottle of Dragon Seal wine was launched in 1988, the year of dragon according to the Chinese lunar calendar.

To guarantee wine quality, some French viticulturists made a study of the soil structure and climate in several vine-growing areas in China to identify the ideal grape source for Dragon Seal. Eventually, Huailai of Hebei Province, a county with over 800 years of viticulture history and 150 km northwest from Beijing, had been selected as the vineyard of Dragon Seal to cultivate more than 10 varieties of royal grapes imported from France. Dragon Seal's pledge is to guarantee each bottle of its wine is made from 100 % quality grapes which are carefully cultivated in China.

The production of Dragon Seal is always supervised by a French oenologist and two France-trained Chinese oenologists. Dragon Seal is a pioneer in the following areas in China: One of the wineries which have the long history of producing varietal wines-the Dragon Seal "Cabernet Sauvignon " and "Chardonnay" are highly praised by consumers and wine professionals.

The first sparkling wine producer-Dragon Seal Sparkling Wine is produced under the traditional Champagne method. The first producer of regional wine-"Dragon Seal Huailai Reserve", a wine made from the red varieties of Huailai Region, was launched in 1996 as its first vintage.

For its outstanding quality, Dragon Seal attained its first wine medal in 1989 (the following year of the establishment of the Winery) in Reims of France. Subsequent to this international recognition, Dragon Seal had been awarded another 27 medals in many important international competitions.