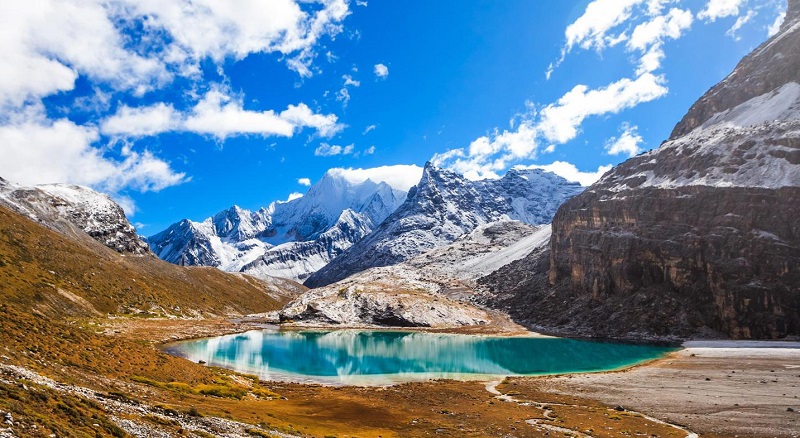 Daocheng is honored as "the Last Shangri-La", and “the Last Pure Land on the Blue Planet”. which is world-famous for unique original natural sceneries, a number of snow-capped mountains, glacier-red lakes, and forested valleys, it is suitable walking, riding, cycling, or camping.

Of all the Tibetan regions,

Where I have already been,

Never have I seen a prospect

Which is finer than that I find here.

In the far southeast of, under the administration of Sichuan Province, Daocheng is a Kham county blessed with a varied and beautiful landscape. From the northern glacial-erosion highland where thousands of lakes and ponds are scattered and crowds of wild animals are inhabited, the topography descends through the rolling hillswhere there is a lot of farming, pasturing and, across the comparatively flat heartland, up to the soaring heights of the mountainous south where stands a vast mountain consisting of three isolated peaks known as Khonggasnow-capped) Reesum3) Gomboreligious protector).

quite a Khamba land

'Kham' means 'eastern'  while '' is for '' in Tibetan.are the people inhabited in the east of Qinghai-Tibet Plateau. They are tall, well-built, fearless and open of countenance. And they are gifted for business. Joseph F Rocka famous American explorer, said they resembled Apache Indians.

is the poetry of all great outdoors.

Of course, the best way to experience Daocheng's unbeatable combinations of natural beauty and cultural riches is the walk through them. If you are a camper, Daocheng is your delight. No matter where you are in Daocheng, you are under the stars in splendid isolation. Yes, you might be disturbed by a few safe animals passing by, such as pheasants, antelopes and so on.

Daocheng is the paradise of the wild

Daocheng is a pilgrim must for a Buddhist in his lifetime.

Three snow-capped Mounts called Khongga Resum Gombo in Daocheng is one of the 24 Holy Lands in Tibetan tradition.In 8th century Guru Rimpoche Padema Sambhava came to Daocheng. To overcome the powerful adversaries of Bonism (local religion) there he inaugrated a great many of peaks and lakes in the light of Buddhist figures. Of all the bodhisattivas, yidams, dakas and dakinis, Khangga Reesum Gombo is the most sacred. It is the  pious wish of every Tibetan to make a pilgrimage at least once a life to the Holy Trinity. They are:

Mt. Jampeyon (19,555feet), Manjushri in Sanskrit, Budhisattiva of Wisdom. The one here is Red Manjushri, serving as  Protector of Mind

Mt. Changna Dorjee (19,555feet),Vajrapani in Sanskrit, known as Thunderbolt Holder. The name is given to all the bodhisattivas holding vajra (thunderbolt, also known as Diamond) in their wrathful appearances to be in charge of Religious Protection. The one here is black, or blue in high-rank lamas' eyes, serving as Protector of Body.

In Tibetan Buddhism the Trinity symbolizes Three Emptiness (Body, Speech and Mind)theoretically and functions in subduing evil spirits practically. The mountains have been inspiring awe all the time and preserved so well that one may find what it was here hundreds of years ago. True, it is home to some 100 species of animals among its spurs, cliffs, galciers, lakes, streams, valleys, gorges, flowering alpine meadows and majestic virgin forests.

Shenrizig(another spelling of Chengrezigs) resembles a huge white throne, such as Living Buddhas use when meditating---a worthy seat for a Tibetan deity!

In a cloudless sky before me rose the peerless pyramid of Jambeyang(another spelling of Jampeyon),the finest mountain my eyes ever beheld.

It also prevented me from securing better photographs of Mount Chanadorje(another spelling of Changna Dorjee),for it persistently refused to unveil its roaring head.