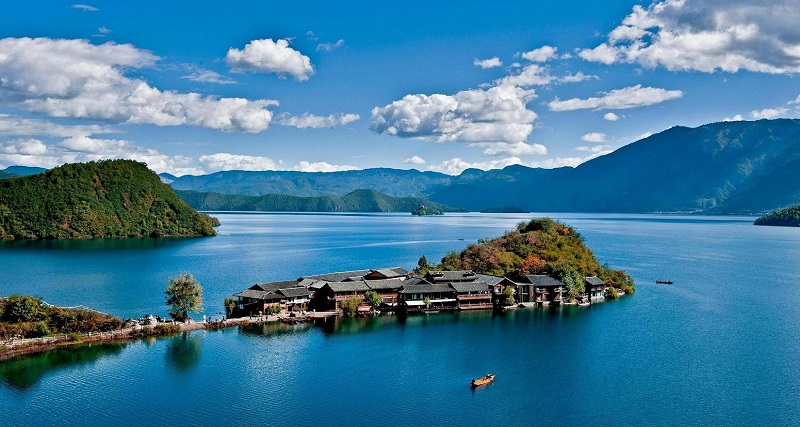 Lugu Lake is called the "mother lake" by the local Mosuo people, who comprise what is sometimes described as the last matriarchal society in the world. The Mosuo people have been living relatively isolated lives around the lake for generations, and have retained their ancient traditions and customs.

Lugu Lake is located between Ninglang County in Yunnan Province and Yanyuan County in Sichuan Province, about 300km away from Lijiang. It is a plateau lake with a total area of 52 square kilometers, 2,685 meters above the sea level. The average depth is 45m, and the deepest point being 93m. The lake remains an uncontaminated plateau lake with the crystal-clear water.

Lake is embraced in green mountains. The best-loved onethe Mosuo people is the Holy Gemu Mountainthe Lion MountainThe local people worship it as their Goddess Gemu. On 25th July of each lunar year, they will gather at the foot of the mountain for a great sacrificial rite.

Among the five islands in the lake,are in the territory of Yunnan and two in that of Sichuan. Heiwawudao, Ligedao are metaphorically called Three Islands of Ponglai （means Islands of the Immortals in Chinese）。 Sitting in the middle of the lake, Heiwawudao Island is also called the Chieftain Island because Ashaoyun, the chieftain of Yongning, built his villa on the island in the Guangxu period of the Qing Dynasty. Rock, an American scientist, also used to reside on this island. On the south side of the lake stand Liwubidao Island lies at the foot of the Lion Mountain. It is actually a small peninsular formed by the extension of the Lion Mountain into the Lake. A dozen of Mosuo families live on this island so it is possible for the visitors to experience the life on the island and, at the same time, enjoy the beautiful scenery of the lake.

Many cultural sites and scenic spots are scattered along the lakeside. They are Mosuo villages, plateau hot springs, the underground maze- Lucky Cave, the Chieftain's Palace, Zhamei Lama Temple, Riyuehe - The Ruins of the Yuan Army Quarters when Kublai Khan was on his south expansion and Yongning - the key town on the Ancient Tea-horse Road.

The pretty and graceful Mosuo girls, the ancient and natural canoes and the pleasant fishing songs are considered to be the three most enjoyable things on the lake.

The Mosuos, a branch of the Naxi ethnic group with a population of about 15,000, are the main ethnic group scattered in the lakeside villages. The Mosuo women wear long hair tied into a bun and red, green and black garments and white folding skirts with colorful sashes tied round their waists. Before 13 years old, they usually wear long gowns. After the initiation ceremony at the age of 13, men wear trousers and women wear skirts.

The Mosuo people have their own ways and customs, and still retain some remnants of the matriarchal society. Men and women are not bound by marriage, each living at one's mother's home. Men work at home during the day and spend their night with the women they loved in theiv homes. Children are under the care of and supported by their maternal families. Fathers do not live in the same family with their children and women so that they are not bound up with their women financially in their production and life. This unique wedlock values affection and gives more freedom to men and women in their relationships. They may choose to unite or separate at will. It has been considered as the living fossil as a basis for a study of social patterns and matriarchal marriage customs in today’s world.

The Mosuo wooden houses are built with square-deged timber in the style of jinganshi building’ also called Mulengfang （Timber House）。 The Naxi villages look graceful and unaffected. The Zhuanshan Festival （the Festival of Turning-around the Mountain） which falls on 25th July of the lunar year is the traditional festival of the Mosuo people. On that day they would dress in their Sunday best to worship the Gemu Goddess Mountain （the Lion Mountain） and pray for the Goddess' protection. It is also a time for horse racing, wrestling and antiphonal sining. The young people take the chance to search for their lovers, whom they call A xia.