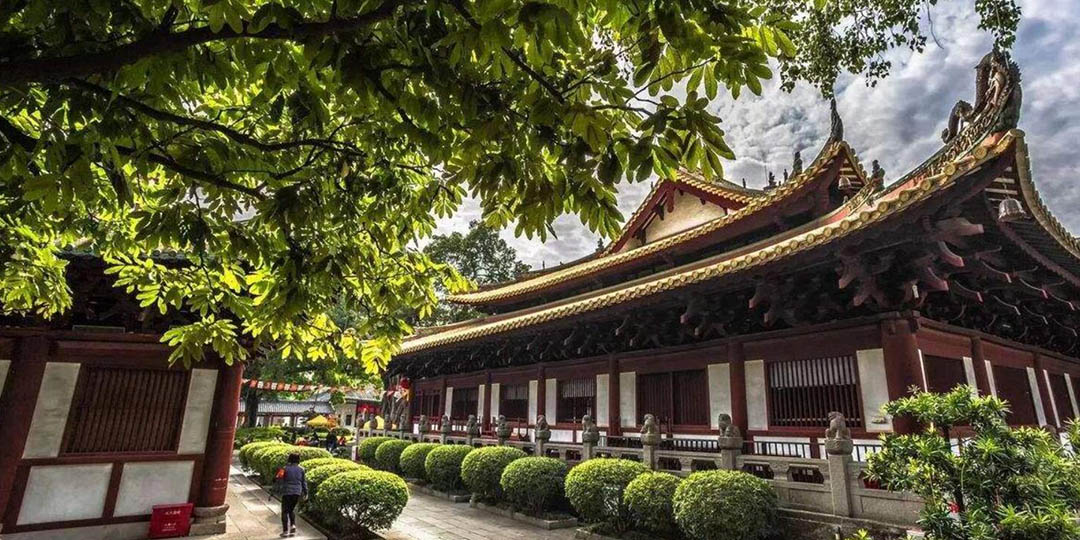 One of the largest and most prominent temples in China. It is also a National Cultural Preservation Site with a history of more than 1700 years displayed through its architectural designs preceding the founding of the city of Guangzhou. Also, the location where the famous sixth master, Hui Neng of Zen Buddhism was initiated into monkhood by cutting his hair and starting to serve.

Situated at the north end of Guangxiao Road, Guangxiao Temple, also known as Bright Filial Piety Temple was initially constructed in the western Han Dynasty by an Indian Monk to be used as a private home by Prince Zhao Jiande of the Nanyue Kingdom and later turned into a lecture hall before being completely converted into a Buddhist Temple in the Song Dynasty occupying an area of 31000 square meters.

The type of architecture of the temple clearly gives an insight into the culture and history of Chinese Buddhism in addition to the history of Guangdong province. The grandness and majestic nature of the temple and palace make Guangxiao Temple become a treasure of Chinese architecture standing imposingly and solemn. It is a famous pilgrimage site where Zen Buddhists gather to practice their beliefs.

Visiting this temple gets you on the same footsteps of famous monks like Indian founder of Zen Buddhism, Bodhidharma, Xuanzang of the Tang Dynasty, Bodhidharma: the 28th patriarch of Buddhism and Huineng who was ordainment in the temple under the bodhi tree several years ago. You also get to see unique structures such as the bluestone made mushroom shape Dharani pillar inscribed with words of Mahakaruna Dharani Sutra on all eight of its sides.

This temple serves as a popular pilgrimage destination for Zen Buddhists and has highly contributed to the spread of Buddhist culture thanks to the numerous monks and sutra translators who live in the temple. At the heavenly king hall, you can see a 380-year-old Helin Stele engraved during the Ming Dynasty and a Spring of Washing Bowl for clean water to be used by monks that were dug up in 527.

The main complex consists of:

Set up during the Northern Song Dynasty to commemorate Hui Neng with a humongous statue inside, this seven-level pagoda that is 25.6 feet high and octagon-shaped houses different shrines in each of its floors. Behind the hall is bodhi tree that signifies the Buddhist ideal of wisdom and it is where Hui Neng’s hair was buried after he became a monk.

Sitting on the highest pedestal at 13.6 meters with the Bell and Drum Tower situated side by side. Inside the hall are Buddhist statues known as three saints of Huayan with Sakyamuni at the middle of Visvabhadra and Manjusri. At the front of the hall are two ancient stone pillars uniquely inscribed with scriptures.

The East and West Iron Towers

The two east and west towers are the oldest iron towers in China constructed in 963 and 967 respectively. The east tower remains standing strong against all forces but four topmost floors of the West Tower couldn’t survive the collapse of the house. There are at least 1,000 shrines here and every one of them houses a Buddha statue carved to its exterior and gilded.