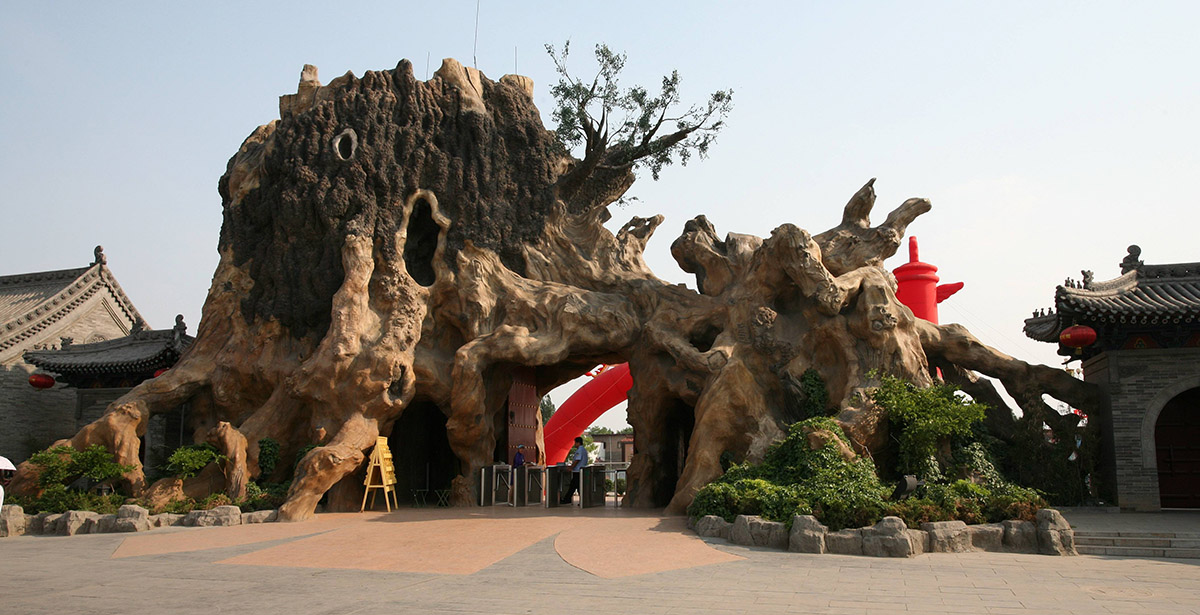 The historic site of immigrants of Ming Dynasty -Hongtong Dahuaishu Ancestor Memorial Garden is well-known throughout the country,it has always been a place for ancestor worship by immigrants and descendants of Giant Locust Tree home and abroad for more than 600 years.

A pavilion housing a tablet was built on the historical site of. According torecord, the first Scholar tree was planted in Dynasty Han with a history over 1800 years until now. Because it is too close to river Fen and quite old, in year 8 emperor Shunzhi of Qing Dynasty, when river fen flooded, the Scholar tree was destroyed by flood. Thus a tablet took place of. Though the pavilion housing a tablet is not big, it engraved exquisitely and skillfully. The painting engraved included “wishing a happy birthday”, “magpie on plum tree”, “the heavenly emperor, the earthly emperor and human emperor”. The Chinese character written on the tablet was not written by, but by brush. One of theof the site had a poor friend who did not have money for building the site, so he used the brush to write Chinese character, without leaving, though without money, with good Chinese character, thus left the characterthe tablet.

There is a couplet hung on the columns of the hall. That means: the ancestors began to emigrate for better farming and gathering property. Our offspring of the Scholar tree should memorize the hard work ofand revitalize China.

Atof, there were many rebellions,outside andfrom, areas outside Shanxi faced. But Shanxi, comparing to other areas, were much more prosperous, with more refugees immigrated to Shanxi from outside, Shanxi became a place with more population. Dynasty Ming once organize eight large-scale emigration in order to strength new government and develop farming. South of Shanxi is the populated, however Hongdong is the county with. In Ming dynasty, there was a Guangji temple in Hongdong.temple is very big with many monks and believers. Besides the temple, there was a huge old Scholar tree housing many magpies. The emigration business was runGuangji temple by the local government in Ming Dynasty. Thus the Scholar Tree became the gathering place for those emigrants.

In the late fall, when the leaves fell to, the emigrants stared at the ancient Scholar tree, the magpie perched on the tree whined, the emigrants felt so sad and were not willing to leave. For the reason, the Scholar tree and magpie nestle became the symbol for emigrants saying farewell to hometown. There was a folk: where is my ancestors coming from? From the Scholar Tree Site in Hongdong; what is the hometown name of my ancestors? The magpieunder the Scholar Tree Site.  The folk songs passed around so widely for hundreds of.

The emigration from Hongdong Shanxiearly of Dynasty Ming covered all over China from north to south and from east to west. It was the longest and largest emigration organized and very rare in ancient China. In order to better farming and strengthening government control, the government in Dynasty Ming carried forward the policy of emigrants farming for alleviating the class conflicts. Whatdid in Ming Dynasty help to promote and recover the farming industry, well-managing society and frontier.

In Republic of China, one offspring from Hongdong came back home, he gathered money and built the pavilion housing a tablet and tea house. Atof 80’s, the local government in Hongdong county renovated and enlarged park of Scholar Tree.