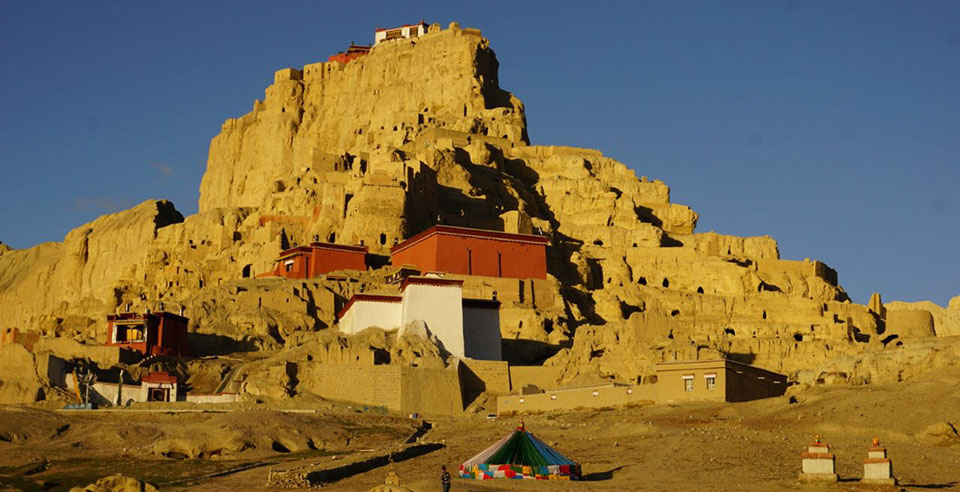 In addition to explore the historical significance, Ruins of Guge Kingdom is also a great Tibet attraction place to enjoy the barren natural landscape and admire the lost civilization.

The Ruins of Guge Kingdom are located in Zhada County at the Ngari Prefecture situated on the ridge of Tibet. 1000 years ago a great kingdom was set up by one of the branch of descendants of a nearby crumbled Kingdom in the midst of civilization in Ngari covering an area of 200,000 square meters. To date there are a total of 1,416 surviving pieces of architecture, including 445 houses, 28 pagodas, 879 caves and 60 blockhouses with four tunnels leading to all directions inside the architectural group of the Ruins at the Guge Kingdom. Most houses in the ruins have level roofs and wooden structures. At the outer ring there are walls made of loess, decorated with numerous figures of Buddha, scriptures and incantations of Tibetan origin and some have Sanskrits engraved on huge cobbles.

These ruins were once upon a time an imperial estate that was ruled by about 16 kings each with their armies of thousands of soldiers for a period of over 700 years. However in the 1660s, the kingdom fell into disrepair after invasions and civil revolts of allied armies of eight foreign countries which disintegrated the once prosperous state into what stands to date. The battle came to a halt after the disordered state that was under the rule of one of the brothers of the king asked the ruler of the neighboring country Ladakh which is the present Kashmir to send his army for more manpower. This is how they overthrew the once prosperous state.  However, the fascinating kingdom has been preserved and what stands now is a reminder of what wasn’t lost. Because of its great research value, the Ruins of Guge Kingdom have been listed under the first group of Cultural Relics of National Importance under the Protection of the State. 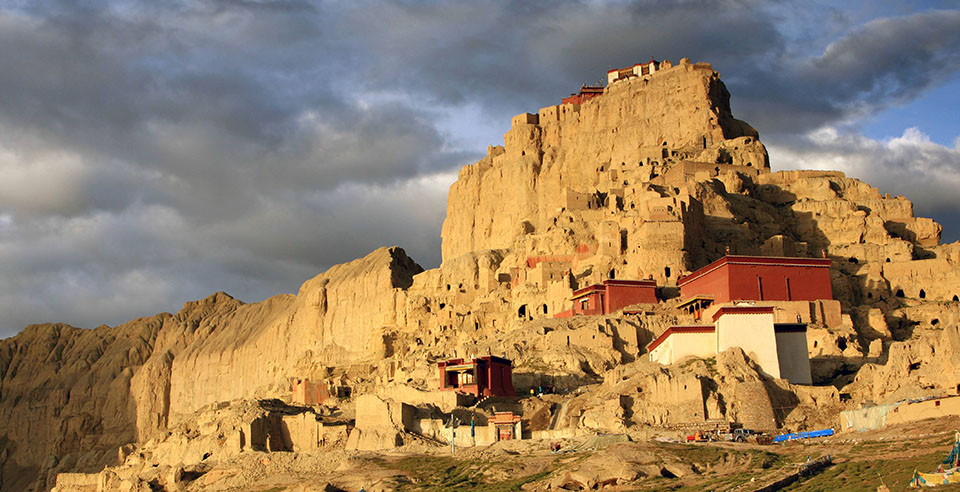 Things to see and do on Ruins of Guge Kingdom

Visitors can see an eleven story castle standing at 300 meters high with pagodas, caves, tunnels, blockhouses and defensive structures. The castle has the Summer Hall and the Winter Hall where the royal family once lived. In addition to this, there are other bigger destinations in the ruins such as the white temple, the red temple, the meeting hall and the king palace. The Red Temple and the White Temple are around the same size occupying 300 square meters with 36 square pillars in the temple. The ceiling and pillars have drawings of figures of Buddha and patterns colored on them. The walls are also covered in frescoes of different themes which are rich artistic works.

The most complete and valuable artifacts remaining here are the murals, which are mainly pictures of the king, queen, Sakyamuni, prince and other royal servants. Most of the statues found here are golden and silver statues. Amongst these is the Silver Eyes of Guge which is of the highest achievement. In addition there is a sanctuary with pictures of the cultivation of the male and female Esoteric Buddhas. The colors and lines of the murals can be compared with those found at the Mogao Caves in Dunhuang City located in Gansu Province.

The Ruins of Guge Kingdom now extend to more than 300 meters high and visitors can see what explorers found which are over 400 rooms and 800 caves including some pagodas, fortresses, granaries, secret paths and arm storerooms. The ruins are surrounded by a city wall and a fortress marks each of the corners. Visitors can also see how the temples and palaces are arranged from top to bottom indicating supremacy but have a secret road connecting them