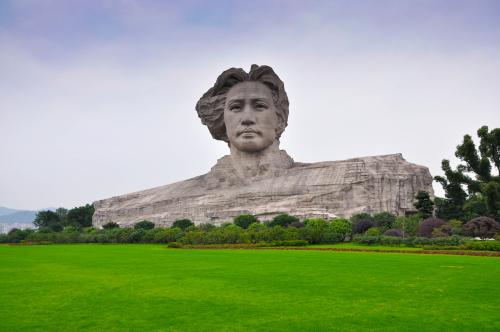 Orange Isle, the biggest isle in the Xiang River. It got famous by the poem of Chairman Mao and traveler even see his statue, now it becomes a leisure park for sports and a good place for enjoying beautiful fireworks.

The Youth Mao Zedong Statue was built on the isle, it can be seen obviously. Chairman Mao wrote his great peom Changsha here, which this isle become famous. There are fields of oranges here in fall, it's worthy to visit here. Fireworks display is very stunning, starting from 8:00 -8:30 pm every Saturday in winter and spring, other reasons delay 30 minutes.

It's one of four famous pavilions in China and culture relic protection site. The name on plaque written by chairman Mao. The name originally comes from a poem which describes how beautiful red maple leaves are. Leaves wing and float down in December, you'll see the red beauteous world. It makes gentle noise when people stepping on.

It's one of four ancient academies which preserves best. It changed many names within thousand years, it was named as Hunan University in 1926. The remaining architecture is from Ming and Qing Dynasty which shows completely magnificent scene of ancient building. Besides, there has preserved numerous ancient plaque relics.